For the element, see Gold.

The first recorded use of golden as a color name in English was in 1300 to refer to the element gold and in 1423 to refer to blond hair.[1]

Metallic gold, such as in paint, is often called goldtone or gold tone, or gold ground when describing a solid gold background. In heraldry, the French word or is used.[2] In model building, the color gold is different from brass. A shiny or metallic silvertone object can be painted with transparent yellow to obtain goldtone, something often done with Christmas decorations.

The source of this color is the ISCC-NBS Dictionary of Color Names (1955), a color dictionary used by stamp collectors to identify the colors of stamps—See color sample of the color Gold (Color Sample Gold (T) #84) displayed on indicated web page:[3]

The first recorded use of gold as a color name in English was in the year 1400.[1]

The American Heritage Dictionary defines the color metallic gold as A light olive-brown to dark yellow, or a moderate, strong to vivid yellow.

Of course, the visual sensation usually associated with the metal gold is its metallic shine. This cannot be reproduced by a simple solid color, because the shiny effect is due to the materials reflective brightness varying with the surfaces angle to the light source.

This is why, in art, a metallic paint that glitters in an approximation of real gold would be used; a solid color like that of the cell displayed in the adjacent box does not aesthetically read as gold. Especially in sacral art in Christian churches, real gold (as gold leaf) was used for rendering gold in paintings, e.g. for the halo of saints. Gold can also be woven into sheets of silk to give an East Asian traditional look.

More recent art styles, e.g. art nouveau, also made use of a metallic, shining gold; however, the metallic finish of such paints was added using fine aluminum powder and pigment rather than actual gold.

Old gold is a dark yellow, which varies from heavy olive or olive brown to deep or strong yellow. The widely accepted color old gold is on the darker rather than the lighter side of this range.

Golden yellow is the color halfway between amber and yellow on the RGB color wheel. It is a color that is 87.5% yellow and 12.5% red.

The first recorded use of golden yellow as a color name in English was in the year 1597.[6]

Golden Yellow is one of the colors of the United States Air Force, along with Ultramarine Blue.[7]

Golden poppy is a tone of gold that is the color of the California poppy—the official state flower of California—the Golden State. 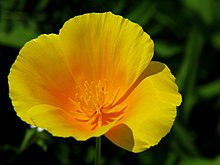 The first recorded use of golden poppy as a color name in English was in 1927.[8]

Gold is the oldest color associated with Arizona State University and dates back to 1896 when the school was named the Tempe Normal School.[9] Gold signifies the golden promise of ASU. Gold also signifies the sunshine Arizona is famous for, including the power of the sun and its influence on the climate and the economy. The student section, known as The Inferno, wears gold on game days.

The official colors of the University of Southern California are Pantone 201C and Pantone 123C. These colors, designated as USC Cardinal and USC Gold, were adopted in 1895 by Rev. George W. White, USCs third president, and are equal in importance in identifying the USC Trojans.

California Gold is one of the official colors of the University of California, Berkeley, as identified in their graphic style guide for use in on-screen representations of the gold color in the universitys seal. For print media, the guide recommends to, [u]se Pantone 7750 metallic or Pantone 123 yellow and 282 blue.[10] The color is one of two most used by Berkeley, the other being Berkeley Blue; these, together, are the original colors of the University of California system, of which variations of blue and gold can be found in each campus school colors.

The color was approved by the University of California, Los Angeles (UCLA) Chancellor in October 2013. This is a shade of gold identified by the university for use in their printed publications.

MU Gold is used by the University of Missouri as the official school color along with black. Mizzou Identity Standards designated the color for web development as well as logos and images that developers are asked to follow in the Universitys Guidelines for using official Mizzou logos.[15]

The color pale gold is displayed at right.

This has been the color called gold in Crayola crayons since 1903.

The color sunglow is displayed at right.

This is a Crayola crayon color formulated in 1990.

The color harvest gold is displayed at right.

This color was originally called harvest in the 1920s.

The first recorded use of harvest as a color name in English was in 1923.[18]

Harvest gold was a common color for metal surfaces (including automobiles and household appliances), as was the color avocado, during the whole decade of the 1970s. They were both also popular colors for shag carpets. Both colors (as well as shag carpets) went out of style by the early 1980s.[citation needed]

Displayed at right is the web color goldenrod.

The color goldenrod is a representation of the color of some of the deeper gold colored goldenrod flowers.

The first recorded use of goldenrod as a color name in English was in 1915.[19]

Displayed at right is the color Vegas gold.

Vegas gold, rendered within narrow limits, is associated with the glamorous casinos and hotels of the Las Vegas Strip, United States.

Vegas gold is one of the official athletic colors for the Notre Dame Fighting Irish, Boston College Eagles, Colorado Buffaloes, South Florida Bulls, St. Vincent–St. Mary High School, Vanderbilt Commodores, the United States Naval Academy Midshipmen, and Western Carolina University Catamounts. It is one of the official colors of the NHLs Vegas Golden Knights, and was the type of gold the Pittsburgh Penguins used on their uniforms until they reverted to Pittsburgh gold, the shade traditionally associated with the city.

At right is displayed the color satin sheen gold. This is the name of the color of the Starfleet command personnel uniform worn by Captain Kirk of the USS Enterprise in the TV show and movies Star Trek.[20][21][22]

The first recorded use of golden brown as a color name in English was in the year 1891.[23] Golden brown is commonly referenced in recipes as the desired color of properly baked and fried foods.

In addition to elemental gold, a number of compounds or alloys have a reflective gold hue: