In her first annual report as Information and Privacy Commissioner of Ontario, Patricia Kosseim provides an overview of the significant developments that shaped the IPC’s efforts in 2020, along with initiatives that marked an unprecedented year. The IPC’s annual report sets the blueprint for her term with the strategic priorities that will help focus its efforts to advance Ontarians’ access and privacy rights in an increasingly data-driven world, where organizations are accelerating their use of new digital technologies and artificial intelligence. The strategic priorities are highlighted in Commissioner Kosseim’s annual report, A Year Like No Other: Championing Access and Privacy in Times of Uncertainty. 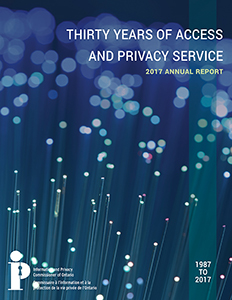 In his 2017 Annual Report, Thirty Years of Access and Privacy Service, Commissioner Brian Beamish calls for a number of legislative changes to enhance both access to information and protection of privacy in Ontario. Among his recommendations is a call to expand the IPC’s oversight to include Ontario’s political parties.

Political parties collect and use personal information to target individuals in specific and unique ways for political gain. Digital tools amass vast amounts of personal information from diverse sources, frequently without the knowledge or consent of the individual. These increasingly sophisticated big data practices raise new privacy and ethical concerns and the need for greater transparency is evident.

Included in each year’s annual report are tables showing compliance by provincial and municipal institutions with the time requirements of the Freedom of Information and Protection of Privacy Act and the Municipal Freedom of Information and Protection of Privacy Act (compliance statistics). The tables set out, for each institution, the number and percent of FOI requests completed within the 30-day time limit mandated by these statutes, those completed within a permissible extended time, and those that went over time. Institutions report these statistics yearly to the IPC, through a dedicated web portal, and the IPC relies on the statistics reported to us in compiling the tables in the annual report.

On December 9, 2016, the IPC received the Freedom of Information Audit report prepared by the Internal Audit Division of the Treasury Board Secretariat. The report contains revised 30-day compliance statistics for the years 2010 to 2015, are detailed below, and should be considered a correction to the previous five annual reports issued by our office.

Letter to the Speaker of the Legislative Assembly of Ontario

Commissioner Brian Beamish has made four significant recommendations to modernize access and privacy legislation. He is asking the government to conduct a comprehensive review of the province’s access and privacy laws to ensure Ontarians’ rights are better protected. A public review and update of the acts will ensure greater transparency and accountability of government institutions, meet the growing expectations of the public and ensure that Ontarians benefit from the same access and privacy rights as other Canadians.